Copenhagen attacks: The weapons, bullet holes, lay-out… Why not aim the attack directly at Lars Vilks as the media tells us? (part 2) 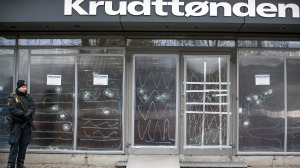 Shooting the guards in the Foyer

When we compare the reconstruction video with the bullet holes, it seems odd to me how the bullet holes shot from the outside (labbelled with a number from the outside) do not match with the gunman (from where the video says he is) trying to shoot the two guards (according to the video they were positioned left). Since the weapon is an automatic weapon, the shooting will not have taken long and there is (given the glass front) no reason for the gunman to walk along the glass doors (standing still seems logical). In fact, why didnot the attacker fire his shots from behind a wall to the right of the main entrance? It would provide him cover and he’d have a clear view of the two guards.

It is strange how there are no  gunshot holes (or just 1) of the automatic weapon in the windows in front of where the three people were standing. According to the reconstruction video, the guards were standing a few metres behind the spot where the police woman is in the picture above (left). The civillian was standing near the bar behind the right glass door (the one with the tape on the picture left). Especially in these two windows are no bullet holes found.

Let us look at the height of the bullet holes. We assume the automatic rifle is positioned to his shoulder, thus at about 1.35cm height or lower (given he is about 1.85cm, and makes himself smaller when shooting). We make further rough calculations, based on the below picture with the small steps in front of the left window. Of course, these same calculations need to be done locally with proper tools, but the below analysis already provides some insight.

The door is about 200cm high. The difference between street level and the inside floor level must be about 23cm. The average height of the outside-in bullet holes is 158cm calculating from street level (135cm calculating from inside floor level). From the construction video and the CSI picture below, we assume he was about 3.5 metres from the front. The angle of the trajectory is thus estimated as gaining 23cm altitude per 3.5 metres (6.6cm/metre). Based on these rough calculations, the attacker seems to have aimed at the security mans heads, assuming they would be standing up tall. This is an odd choice for an untrained attacker, as the chance of missing is significant. A trained security men will dive down immediately. Moreover, when he would hit head/neck, it is often deadly. He somehow was able to shoot the men inside, but not deadly. I am surprised he hit them at all.

Finn Norgaard went outside and he was killed almost instantly.

The odd thing is, when the organizer of the event was interviewed right after the attack, she does not even mention Finn Norgaard as a victim (link). She immediately claims Lars Vilks to be the main target, even though Lars Vilks was not even close to being shot.

Somehow Finn Norgaard is not mentioned, nor do we see his body (covered) in the initial video reports. There are also no labels or other markers on the floor where he was shot. My assumption now is, Finn Norgaard was an unplanned victim. He was not included in the programme, which they were about to perform to the public in the media.

What do Norgaard’s friends know about what happened to him? This is what the website says:  “On the afternoon of Saturday 14 February, Finn Nørgaard was murdered in front of the Krudttønden cultural centre in the Østerbro district of Copenhagen. We do not know all the details, but subsequent evidence suggests that Finn attempted to prevent the 22-year-old man from continuing to shoot through the doors at a debate on the subject of freedom of expression. 28 shots were fired through the façade of Krudttønden, before Finn approached the terrorist, who then shot Finn. Finn died quickly, despite the ultimately vain attempts of private individuals and paramedics, who hurried to the scene, to save his life.”

The reconstruction video assumes Norgaard must have left the conference room through the back door, to walk around (?) to try stop the attacker (?). It is somehow overlooked in the media. This part of the story is unclear. What are possible scenario’s here?

On the picture left we see a CSI collect data on the location where Finn Norgaard was found heavily injured. This is confirmed by video coverage of BBC news (link at 1.06s in the video). From the photo to the left, I am guessing the gunman might have be standing exactly there, as it looks like some cartridges are labeled on the ground (is not certain).

This would confirm the position of the gunman as described by the reconstruction video above. It would also confirm their suggestion, Finn Norgaard might have tried to capture the gunman by sneaking up behind him (between a car and some plants). We also know Norgaard was shot from close range. It seems that scenario 2 is the most likely scenario. Yet, in the reconstruction video, Norgaard is positioned on the wrong location.

Why on earth organize a free speech event just a few weeks after Charlie Hebdo, with high profile guests, in a small venue with access to the conference room from all sides (accessible from the street). There were several ways available to go about this attack.

The more I study this case, the more questions I have. While I am unable to gather as much data in Copenhagen (like I did for my own case and the case of Fred de Brouwer) I just know this is a scam too.

Right: First Aid is given to attendants of the free speech debate (in the Foyer next to the conference room Stalden).

Maud Oortwijn had been a target of organized gang stalking for many years. We believe this must stop, for her and for everyone else facing it.
View all posts by MOL →
This entry was posted in Maatschappij and tagged 14/2, attacks, bullet holes, Copenhagen, Krufttonden. Bookmark the permalink.